Life in the Department

Pasadena has nearly 300 sunny days a year, with temperatures typically between 65° and 90° F, and cool nights even in the summer thanks to the marine layer, a cool layer of air coming in from the ocean at night. Despite this idyllic weather, the proximity of beaches, mountains, and an overwhelming choice of activities all around Los Angeles, members of the department enjoy working collaboratively in the Annenberg Center and the Steele house---our two side-by-side locations. Caltech is so close to Hollywood that sometimes, we borrow their sign. 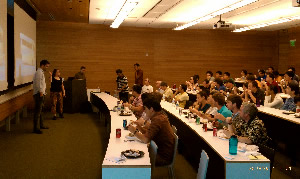 The department promotes social interaction through various gatherings. Lunch bunches, for instance, are weekly informal gatherings (with lunch provided!), centered around a scientific-american level presentation by a faculty member, visitor, or post-doc of the CMS department---a great way to remain current on the wide variety of scientific research projects happening around us. We also have a monthly CMS bash to meet and greet the newcomers or just catch up with our colleagues. Options also have their own activities: CMS graduate students meet every Friday for tea while a student presents a recent topic or paper; CDS teas only involve food and drinks, but technical debates are common. Our lounge is also a place where chance encounters often end up in ideas being derived and explored on the whiteboard. 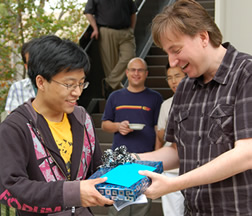 Besides the undergraduate and graduate degrees granted by the department, we also have two departmental awards given every year:

In their own words...

Here are what some of our alumni have to say about their experience at Caltech.